The identification of waterborne pathogens forms an ongoing detective story with several strands. Find out more about

As with any scientific endeavour, identification of the pathogens that cause waterborne infection has been due to the combined efforts of hundreds of investigators. These are just a few examples and highlights from a process that began over 400 years ago and continues today.

1670s - The Discovery of "Little Animals" in Water 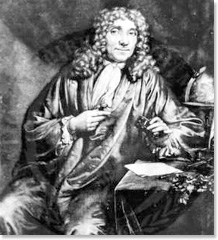 Until the 1600s, no one knew that tiny microorganisms, invisible to the human eye, even existed. Then Antony van Leeuwenhoek, a cloth merchant who used magnifying lenses to examine the quality of fabrics, began to experiment with building better magnifying tools. Out of curiosity, he began to look at magnified drops of water. To his astonishment, each drop contained a world of "little animals" going about their lives. He had discovered protozoa and bacteria, 'though as yet no one considered them possible causes of disease.

1681 - The First Description of Giardia lamblia

Van Leeuwenhoek observed a tiny organism that was probably the protozoan Giardia lamblia, now known to be the cause of "beaver fever". Here's how he described the creature: "All the particles aforesaid lay in a clear transparent medium, wherein I have sometimes also seen animalcules a-moving very prettily; some of 'em a bit bigger, others a bit less, than a blood globule, but all of one and the same make. Their bodies were somewhat longer than broad, and their belly was flatlike, furnisht with sundry little paws, where with they made such a stir in the clear medium and among the globules that you might e'en fancy you saw a pissabed running up against a wall; and albeit they made a quick motion with their paws, yet for all that they made but slow progress."

1855 - First Discovery of the Cholera Pathogen

By the mid-1800s, some doctors and scientists were beginning to think that microorganisms (germs) might cause some diseases, but the idea was not generally accepted. During an outbreak of cholera in Florence, Italy, Filippo Pacini correctly identified a Vibrio bacterium  as the cause of cholera. His discovery was not widely circulated and was ignored by the scientific community. 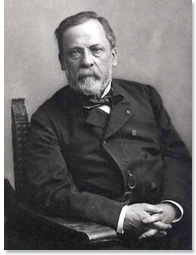 Mounting evidence, supplied by many different researchers, led to the gradual acceptance of the idea that some of the tiny creatures first seen by van Leeuwenhoek could cause serious diseases. Louis Pasteur, investigating failures in the silkworm industry, discovered that disease could be passed from one silkworm to another through microorganisms on leaves, and promoted acceptance of the idea that a similar process occurred with some human illnesses.

Doctor Robert Koch was sent to Egypt by the German government to investigate an outbreak of cholera. He successfully identified Vibrio cholerae as the disease-causing organism and was given credit for its discovery for many decades, until Pacini's earlier identification was acknowledged.

Theodor Escherich, a German paediatrician, became convinced that many diseases of children were caused by bacteria. He began to study the intestinal bacteria of children and was the first to identify strains of both E. coli and Campylobacter, 'though he did not suggest that either caused disease. (Many strains of E. coli are, in fact, normally found in the intestine and do no harm.)

Dmitri Ivanovski, a Russian biologist who was studying a disease of tobacco plants, discovered that the disease-causing organism was something much smaller than bacteria - so small that it could not be seen through microscopes of the day.

By the mid 1900s, it had become more common for investigations of pathogens to be carried out by teams of investigators rather than individuals. When E. coli O157:H7 first came under suspicion as a newly emerging and dangerous strain, for example, scientists in at least three different countries reviewed more than 3,000 existing samples of E. coli in order to confirm this suspicion.

Investigation of and, more importantly, prevention of outbreaks of waterborne diseases are now carried out around the world every day. The examples below represent only a small part of a much bigger endeavour.

In response to an outbreak of typhus (an infectious, but not a waterborne, disease) in Manchester, England, a small group of doctors banded together in an informal committee to study and ameliorate the disease. They were not paid and had no official standing.

Although no one at the time understood that cholera was a waterborne disease, the worldwide cholera epidemic of the 1830s focused public and government attention on controlling infectious disease. While quarantine had existed for centuries, the cholera epidemic caused many governments to take a more active role in implementing prevention and control measures. In the 1830s and 1840s, the first serious large-scale studies of the relationship between epidemic disease and living conditions were carried out in Britain. Among the recommendations to reduce disease were improvements to sewer systems.

Legislation passed in Britain created a national body called the General Board of Health. It had the authority to impose the provisions of the Public Health Act in any community in which the annual death rate rose above a specified level. The Times newspaper editorialized: "We prefer to take our chance with cholera and the rest rather than be bullied into health."

In Britain, doctor John Snow began to study the spread of cholera. His evidence confirmed that it was a waterborne disease. Read about one of his most famous case studies. Another English doctor, William Budd, studied typhoid outbreaks and suggested that typhoid was a waterborne infection frequently spread by poor hygiene. Some of his proposed control measures included the disinfecting of cisterns in which water was stored and the boiling water before drinking it during an epidemic. 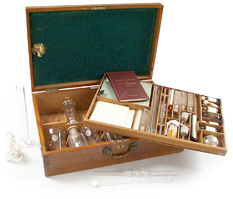 Investigation of Disease Outbreaks From the Collection of the Museum of Health Care Acc.No.1989.7.7

As the medical profession finally accepted the idea that many diseases were caused by specific microorganisms, it became clear that governments and public interest groups could take action to reduce disease. In many communities, public health bodies formed, either as part of government or as independent activist groups. As well as responding to outbreaks of infectious disease, they emphasized prevention through education and measures such as the upgrading of water and sewer systems. 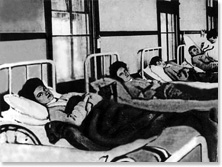 In one of the most well-known investigations of an outbreak of a waterborne infection, American George Soper gathered evidence to show that typhoid was being spread by a woman cook who appeared to be totally healthy, but was nonetheless acting as a "carrier" of infection.

OIHP was the first truly international body formed to combat infectious diseases, including waterborne diseases such as cholera and typhoid. Eventually, nearly 60 countries joined in this effort, which established the first mechanism for international cooperation in investigating disease outbreaks. This role is now filled by the World Health Organization (WHO).