For Service to Humanity: Nursing Education at Kingston General Hospital

For more than a century, Canadians have relied on hospitals to provide the facilities, equipment, and personnel central to scientific medical care.  At one time hospitals also played a central role in the training of new nurses.

From 1886 until 1974, the Kingston General Hospital School of Nursing was typical of the once numerous hospital-based training schools located across Canada.

Nursing is not new...
In Kingston in the early 1800s before hospitals and formal nursing schools, volunteers from the Female Benevolent Society established a seasonal hospital in a disused blockhouse.  They provided food, shelter, and nursing care to the sick poor; local doctors provided free services.

After the new Kingston Hospital opened in 1845, the first nurses were untrained women from the community.

In a parallel move the same year, the nursing sisters of the Religious Hospitallers of St. Joseph established Hotel Dieu Hospital to serve the Roman Catholic population of Kingston.

An era of Canadian hospital reform in the late 1800s heralded the establishment of formal training schools for nurses as advocated by British reformer Florence Nightingale.  KGH graduated its first three nursing students in 1888.

Ann Baillie Nurses' Residence: Recognition and Respectability
The most tangible evidence of Kingston General Hospital's former role in nursing education is the Ann Baillie Building, now home to the Museum of Health Care.

Designed by architect William Newlands and named in 1942 after former nursing school superintendent Ann Baillie, the residence was erected in 1903-4 as the first permanent home for nursing students at KGH.  This impressive building was meant to attract respectable, unmarried young women to nursing and to assure parents that their daughters would be adequately supervised.

The nurses’ home replaced earlier accommodations in the hospital itself, close to the wards and possible contagion from patients.

Designated a National Historic Site in 1998, the Ann Baillie Building is a symbol of the nursing profession’s struggle for recognition and nurses’ contribution to health care in the community and hospital. 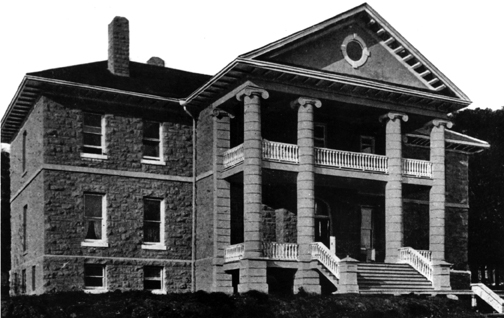 
Beyond the Classroom Walls: Residence Life
A student’s residence room was her refuge, her home away from home.  She and her classmates lived, studied, and worked together for the two- or three-year duration of the programme.  The residence became the centre of camaraderie, commiseration, and the beginning of life-long friendships.

Entertainment and recreation: Working up to 12-hour shifts virtually seven days a week, student nurses had little time off between regulated vacation times.  Making the most of what they had available, they enjoyed dances, swimming, skating, team sports, picnics, and singing in the school’s choir.  Despite limited opportunities, many found time to date. 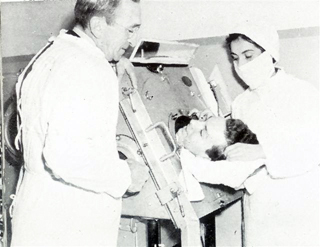 KGH student nurse with a patient in an iron lung, 1947. Image: MHC


Kingston General Hospital nurses: who were they?
Applicants to the school were often inspired to become nurses by nursing-themed books and toys, relatives or friends in nursing, and improved employment options.
Kingston General Hospital nurses were a reasonably homogeneous lot: most were English-speaking Protestant women of British descent from eastern Ontario.
Although the Hospital approved the enrolment of male nursing students as early as 1899, it was not until 1972 that the first and only man graduated. 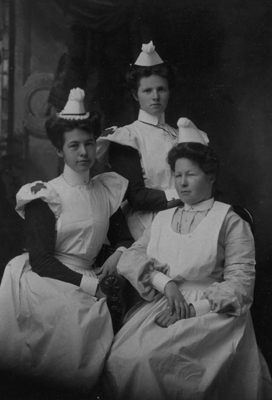 Curriculum & working conditions for Student Nurses
A programme of work and study.
Nursing students trained in the hospital as apprentices, combining studies with practical experience on the wards.  They also provided the hospital with its principal nursing workforce -- some critics described it as indentured service.

Over time, as medical technology evolved and nursing support staff increased, nursing science courses replaced some of the traditional nursing tasks such as cleaning and bed making.

Responsibility and discipline.
Forced to adapt quickly, students working on the wards were given significant responsibilities for the care and protection of their patients, particularly at night. As a result, life at the nursing school was strict and discipline rigorous.  Under threat of dismissal for misbehaviour, students found ways to sidestep some of the rules. 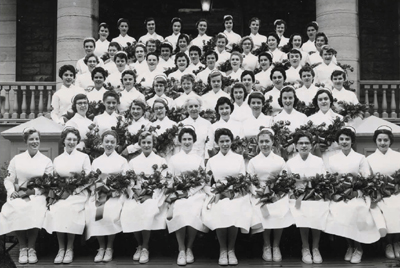 Symbols of profession
Historians' opinions vary on the significance of the nursing uniform, but there is no doubt the nursing student worked hard to achieve her status as a professional and the symbols such as the cap and white uniform that confirmed it.

Until the 1940s, KGH uniforms were known for their distinctive “turkey red” hemlines.

By tradition, at graduation each student received a bouquet of red roses from the hospital and silver cufflinks from the Women's Aid.  The hospital auxiliary was a regular supporter of the school. 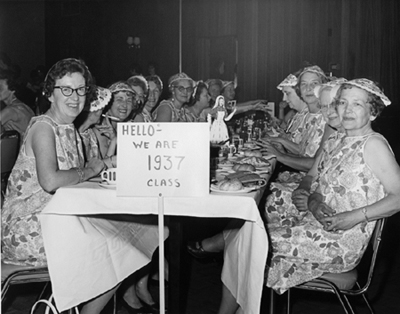 The Aftermath: Where did the Graduates Go?
Most of the first generations of nurses worked as private duty nurses, usually in people’s homes.  Many Kingston General Hospital graduates served in battlefield hospitals during the World Wars.  Others taught nursing, worked in hospitals and institutions, joined public health services, became nurse practitioners, or entered international health care relief work.

The End of an Era -- Closure of the Hospital Schools
After years of study and debate, government and nursing authorities recommended a move away from the apprenticeship format of the hospital-based nursing schools to fulltime study in colleges and universities. This change forced hospitals to hire more graduate nurses to replace the students. Students received more academics, but less hands-on training.

St. Lawrence College and Queen’s University eventually replaced the nursing schools at the Kingston General, Hotel Dieu, and Kingston Psychiatric hospitals.
The last KGH class finished in 1974.  In all, the school graduated 3037 new nurses during its 88-year history.

Our Thanks To:
The Museum of Health Care is grateful for the generous contributions the following organisations and individuals in the creation of this Gallery: