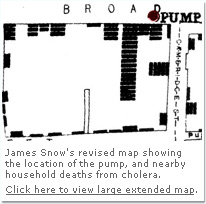 Dr. Snow gets permission from the General Registry Office to copy the death certificates of all those who had lived in districts surrounding the pump and had died of cholera during the outbreak.

On proceeding to the spot, I found that nearly all the deaths had taken place within a short distance of the pump. There were only ten deaths in houses situated decidedly nearer to another street pump. In five of these cases the families of the deceased persons informed me that they always sent to the pump in Broad Street, as they preferred the water to that of the pump which was nearer. In three other cases, the deceased were children who went to school near the pump in Broad Street. Two of them were known to drink the water; and the parents of the third think it probable that it did so.

On September 7, one week after the beginning of the outbreak, Dr. Snow feels he has enough evidence to make a presentation to the Board of Guardians of St. James Parish, who are responsible for the pump. Although it is not totally convinced that the pump is the source of contagion, the Board agrees to remove the pump's handle, making it impossible to operate, as a precautionary measure. The development of new cholera cases stops.

However, a number of cholera cases have also been reported in areas quite distant from the Broad Street pump. If water from one pump is causing the outbreak, why are people who live so far away from the pump getting sick?

How does Dr. Snow investigate this problem?