Cholera is spread through water 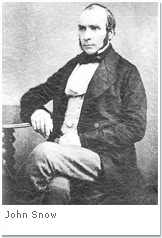 Dr. Snow began his investigations with the working hypothesis that cholera is spread through drinking water.

Mainstream medical opinion of the time holds that diseases such as cholera springs from and is spread by bad air, so that the best way to slow their spread is to eliminate or avoid bad odours, fogs, and stale air. (This is not as silly as it may sound at first; removing rotting garbage from the streets, cleaning out smelly cesspits and outhouses, and keeping rooms scrubbed and well-aired does slow the spread of many diseases.)

Because Dr. Snow thinks that cholera might be caught by drinking contaminated water, he approaches the problem in a different way:

As soon as I became acquainted with the situation and extent of this irruption of cholera, I suspected some contamination of the water of the much-frequented street-pump in Broad Street, near the end of Cambridge Street.

How does he investigate his suspicion that water from the Broad Street pump is the source of the cholera outbreak?